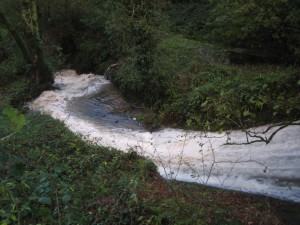 Starting as a trickle high in the hills,
Formed by rain drops falling on fields.
Some are clear others bracken brown,
Caused by the minerals deep beneath the ground.

Gently gathering speed an audible sound,
Omits as a babble,  tumbling down.
Dislodging mud, clearing its way,
I’m in a hurry, it appears to say.

Muddy now as it slows down,
Into a cauldron spinning around and around.
Song birds dipping their beaks and wings,
Carefully, so as not to fall in.

A branch from a tree snaps and breaks free,
Disturbingly: causing all on the bank to flee.
A weir ahead,  cascading water flowing  pure white,
Plunging down head long with all its might.

Now a stream no longer still,  in its pathway a Paper Mill.
Thundering under the old stone bridge,
Passing pretty cottages, and folk in the street.
With a burst:  into Bow Creek.

Theme by Anders Norén — Up ↑

Manage Cookie Consent
To provide the best experiences, we use technologies like cookies to store and/or access device information. Consenting to these technologies will allow us to process data such as browsing behaviour or unique IDs on this site. Not consenting or withdrawing consent, may adversely affect certain features and functions.
Manage options Manage services Manage vendors Read more about these purposes
View preferences
{title} {title} {title}