Return of the prodigal son 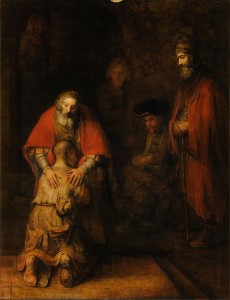 A son in his father embrace

Crying: “I was so foolish, will you forgive me please?

Could I just be one of your servants?”

Let’s go back in the story

Father watching his son’s back, heartbroken

Waiting day by day for his son’s return

Wondering whether he would see his son again

The son’s been through self-inflicted hell

Running away and mocking his Father

Wasting his money for things that can’t satisfy

Finally coming to his senses, deciding to come back

Though not having a reason to expect his Father’s forgiveness

The only prospects of being shamed, mocked and

Yet he is met by Father discarding his dignity

Running towards him, holding him in his arms

Father finally able to utter something else

Calling his servants to bring a robe, sandals and ring

What a shocking twist in the story!

That’s the ultimate love of the Father

Roses are Red, Violets are Blue,
One brief look and we just knew.
From that moment, our love just grew.
You carry my heart now as I have done,
Now you have two, whilst I have none.
You are My Valentine, My Precious One.

My Lady of the Priory

My Lady Of The Priory

My Lady of the Priory your eyes are cold as ice, your heart a burden that is carried heavy like the stone which make up the walls of your residence.
Walls where once pious tapestries draped depicting dramatic images of Christ, where pictures hung of portly fellows astride fine mounts engaged in colourful country pursuits.

Where is the Lady of the night? Who intoxicated, seduced and bewitched so many a poor soul,
With hair;  thick with ringlets which cascaded over childlike shoulders, flowing down across the contours of a flawless satin back.
Curls like soft springs which brushed across cheeks of perfect pink, lightly bouncing on every step taken.

Hair; jet black like Ravens that frequent the empty halls you now walk.
Alas, no longer does it shine with highlights caught by the sun.
Your youth taken from you by a cruel turn of fate, mind rendered blank like a canvas lacking paint.
No sound do you utter, you have nothing to say;  your face appears sad lifeless, sullen and grey.

The wedding dress you wear is tattered and torn; oh! how you morn.
No shoes are there upon your dainty feet, or pretty ribbons in your hair.
On asking for your hand in marriage, declaring my love like no other.
You mocked my proposal, you made fun of me.
So broken hearted I left my home to sail the seas, to return with gold and marry thee.

A wealthy Lord you chose to wed,
but not before the cad took you to his bed.
Promises of taking you for his bride, all resulted in but hideous lies.
Your wedding day did not take place;   jilted were you in disgrace.
So now My Lady can only be found,
haunting this desiccated, lonely ground.

To walk with the head held high

To spend the precious time

With the lovely family of mine

To run faster, to jump higher

To pray more, to admire

The world, the nature and the days

Full of life and full of grace

To speak less and listen more

To visit England and its shore

When there’s the smell of steak and beer!! 🙂

To me no solutions

Knowing what to resist

Knowing what to stop

But why give up?

With no docs to intervene

Theme by Anders Norén — Up ↑